I would invite people to come see me at LibertyCon, but if you don’t already have a membership, you are out of luck. For the first time ever, LibertyCon has SOLD OUT all their memberships. This is the first year they had 700 available, and now they’re all gone (they had around 500 when I started attending this convention a few years ago).

I am really looking forward to this convention. They added an Author’s Alley outside the Huckster Hall this year to accommodate all the authors who do not have a dealer table. I’ve purchased 3 one hour slots, which will give me a place to hawk my books other than my autograph sessions, panels, and reading.

Another reason I’m looking forward to this convention is the sheer number and variety of scientists in attendance. I’ve looked through the profiles of the science panelists and seen at least two whom I wish to mine for research material for a future stand-alone novel I’ve had in the back of my mind for a while now. With the first arc of the Waves of Darkness series growing close to its end (I’m penning the next to last book of the 7 story arc and plan to take a little break before developing the next arc), I will have time to devote to There Is No Arizona, a dystopia story set towards the end of this century. That project is going to require quite a bit of research on several subjects to do it justice, but it IS a book I will write. Many of the cast have already introduced themselves to me, and the main storyline demands to be written.

In other news, I am almost done with the first drawing of a two-drawing Dragon Age fan art commission. I only have to add a background and finish the eyes. I learned long ago during an  Anita Blake: Vampire Hunter fan art project to leave the eyes for last. Having Jean-Claude STARE at me while I finished drawing him was very distracting.

This fan art is a romantic pairing of the character Fenris with a human female. Here’s the progress, so far:

I apologize for the poor quality image. I took this pic with my phone. The drawing is too big for my scanner, and colored pencil doesn’t reproduce very well anyway.

The second half of the commission will be of the character Solis with a female elf.

I will start on it AFTER I have done the cover art for my next book, which I hope to have ready to reveal by LibertyCon, the last weekend of June.

The following is a list of books recently added to my TBR pile. One of the yard sales I went to last weekend yielded the prize of a box full of books for the grand total of $2 USD.

Cash: the Autobiography by Patrick Carr and Johnny Cash

The Redemption of Althalus by David & Leigh Eddings

The Sword and the Flame (book 3 of The Dragon King trilogy) by Stephen R. Lawhead (If I like the stories, I’ll have to track down the middle book of this trilogy)

Bard: the Odyssey of the Irish by Morgan Llywelyn

Myst: the Book of D’ni by Rand Miller with David Wingrove

Myst: the Book of Ti’ana by Rand Miller with David Wingrove

Spearwielder’s Tale: the Dragon Dagger by R. A. Salvatore (whom I shall never forgive for killing Chewbacca, I don’t care how honorable a death it was)

The Spheres of Heaven by Charles Sheffield

The Rise of Endymion by Dan Simmons

and The Death gate Cycle: Elven Star by Margaret Weis and Tracy Hickman

Like I didn’t have enough books piled next to my full bookcase as it was.

…but it has played a major factor in my life recently.

On to important stuff.

I will be running two contests for the remainder of this month until the last weekend of June.

First, I have two red shirt spots for The Daedalus Enigma (due out Fall 2016). To enter, comment on this blog or where I’ve shared the link for this blog on Face Book or Plurk. I will compile a list of names and have someone draw two of them at LibertyCon. Winners will be announced after the convention, and video of the drawing will be posted on Youtube on my Viksbelle channel.

The second contest will only be open to attendees of LibertyCon. I will hold a drawing for a signed copy of Black Venom at the convention on Saturday, June 27. The winner will have until the end of the convention to claim their book. I’ll have to work out some of the details with the convention organizers on how to enter and to best ensure the winner finds out they won. 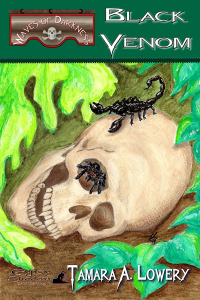 Next item of business: Although this was the second weekend I have been dealing with this head cold, I was at least productive this time. I got a good start on the fan art commission; I did some writing on the MS for The Daedalus Enigma (something I rarely get to do at home); and I got quite a bit of typing done on the MS of Hell’s Dodo.

This coming weekend will be a long one for me. I work four ten-hr. days a week, so I’m off Friday. because of memorial Day, I won’t have to go back in to work until Tuesday night. Hopefully, I can get the fan art done, and get a good bit done on the cover art for Hell’s Dodo and the two promised book covers for a couple of friends. One is for a book of harp music; the other is for a short homoerotic fantasy story.

I’d like to do a cover reveal of Hell’s Dodo at LibertyCon.

Now if I can just get rid of this darn cold AND get my husband nursed back to health, as well.

I was going to get so much done this weekend. Yeah right.

My sinuses had other plans. I’m still not sure if this is a head cold or if I’ve developed a pollen allergy. The one thing I do know is that it has killed my energy for getting planned tasks done.

I did, at least, get started on one of the paying artwork projects I have slated. I wish I could have gotten more done, but I just wasn’t feeling it. It seemed like my mind just didn’t want to settle and let me concentrate.

Anyway, here are my plans for the coming weeks:

Get the cover art for book five done, so I can do a cover reveal for LibertyCon.

Put together a couple of give away contests to be held at LibertyCon. (One will be for the general public and one will be for convention attendees only.)

Contact my local Books-a-Million about a signing/book release event for Hell’s Dodo in November. (I decided on BAM! rather than B&N because they are about 15 miles closer to my home and have a local authors section. The B&N is at the larger mall in the area, on the other side of the river, and in a very heavy traffic zone. One thing working for Merry Maids gave me was an extreme loathing of heavy traffic. Also, a few years back I tried to contact B&N about placing bookmarks advertising my books, since they were available for the Nook and are now in print, as well. I was never able to get any kind of reply from their program director.)

On a more positive note, my book order arrived this weekend. I will have ten full sets of all the titles currently available in my Waves of Darkness series to push at LibertyCon.

Now I have to adjust my sleep schedule for night shift this week and muscle through whatever this is that’s after my sinuses. There has been no fever, so I shouldn’t be contagious. Unfortunately, I don’t have any unplanned paid time off left to spend this year. We’re only allowed three instances of that, and I’ve already used them. If I call out now, it will cost me the attendance portion of my quarterly bonus.

Thanks for putting up with my rambling.

In the meantime, can anyone identify this bush? The leaves look kind of like gooseberry, but the flowers more closely resemble huckleberry. It’s in my back yard, and it wasn’t there last year.