Merry Christmas and Happy Holidays! Had my picture taken with the Salvation Army Santa bell ringer outside the grocer just 5 minutes from my “new” (40-year-old) home a couple of weeks ago.

My office/studio is getting in shape. I was a bit irritated to have to order a new power cord for my printer (which will not arrive until next week/year). Guess I should have unplugged it from the device before I boxed it up to move. The plug prongs broke off. Thanks to a pair of tweezers, I was able to extricate them from the printer’s receptacle. I still have a lot of organizing to do in here; but most of the stuff is unpacked, at least.

I’ll soon have a proper library! There was room in the den for the eating table and chairs, so bookcases will be going into the dining room. No more books piled on the floor (for now, at least).

Speaking of books… Maelstrom of Fate is in the running in the Horror Novel category for this year’s Preditors and Editors Readers Poll! Be sure to place your vote! The six previous titles in the Waves of Darkness series have placed in the top ten during their respective years. I would dearly love to see the series sweep as a set.

Also, if you’re looking for a way to spend that money Grandma sent or the cash you plan to get back from returning unwanted gifts, you could do much worse than buy a copy of one of my books (be it digital or print). Remember, I’ve posted purchase links on each book’s landing page on this site. (Hey, I’ve got a mortgage to pay, after all.)

I hope everyone has had a wonderful holiday.

… also know as fun with auto-complete on your phone. The title above was something I came up with one day when composing a gmail and at a loss for what to put as the subject line. Before you ask, no, I did not stick strictly to the center suggestion my phone gave me. I still try to use correct punctuation and capitalization in my email missives, which means punctuation frequently pops up as my center suggestion.

Still, that would be a fantastic band name, don’t you think?

Writing on season 3 of The Adventures of Pigg and Woolfe is moving slowly currently. I’ve had too many mental distractions this month. It’s just that time of year. I have, however, been making plans for the serial. I’m doing research on self-publishing (read: annoying the crap out of my long-suffering author friends who’ve had some measure of success with self-publishing with questions about what to do or avoid), and hope to have the first episode available by February 2018.

I’ve worked up a rough sketch of the unifying imprint logo for the serial. Once I have a more polished version, I will scan it and share it here. I plan to work it into a kind of frame to use for each episode with a cartouche at the bottom to place the episode title. I will use colored line art relating to each individual episode for the single releases (ebook only) and have a black and white version to use as cover pages for the episodes in the annual omnibus (print) along with possible extra illustrations. This means the omnibus can double as an adult coloring book of sorts (some of the bonus material is intended for mature readers).

I’ve also been asking the people I know with experience about ACX and audiobooks. I’ve had several people at conventions express interest in listening to my books; and I do hold the audio rights. I know one thing I’ll have to do is redesign the cover art, since Audible requires a square cover rather than a rectangular one.

Now, if I can just find the TIME to execute these ideas.

Also, I’ve put a new video up on my Viksbelle channel on Youtube to promote my Take a Pirate Home for Christmas campaign. Check it out…and please subscribe to my channel (shameless begging here; I only have one subscriber, for cryin’ out loud). 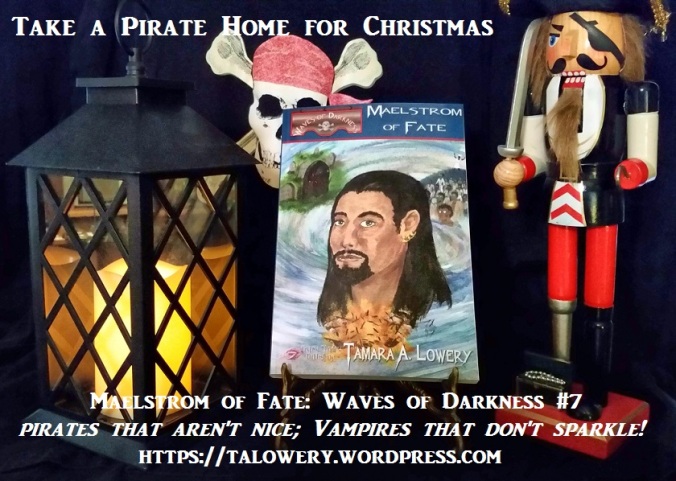 Things are moving along. As of last night, I have reached chapter 14, paragraph 21. Page count in the current format is 93, and word count is at 28,311. I was able to get a little typing done during the work week for a change, but the majority of this week’s progress was attained Saturday.

I just posted the seventh entry in my Readings from the Log of the Pirate Ship Incubus video series and have added it to the appropriate excerpt page and the landing page for Silent Fathoms.

While doing laundry today, I began to brainstorm a Summer Reading book marketing campaign similar to my Take a Pirate Home for Christmas campaign. This will ideally involve using images of the books in a beach setting with appropriately themed props.

Now if I can just find the time to get to a beach to take the photos before things get crowded (before Summer, in other words).

Finally, I am well into episode 18 of The Adventures of Pigg & Woolfe. Episode 24 will mark the end of the second season. I need to start hunting for a publisher. The release process for The Daedalus Enigma has been… interestingly different.

Only after several attempts on various computers using various OSs/browsers was my publisher able to get Barnes and Noble’s site to upload the ebook.

Now it is the Library of Congress’ turn to be difficult. We are still waiting for an ISBN number for the print version.

This, of course means a further delay in adding a photo of the book to my ongoing Take a Pirate Home for Christmas campaign. I realize I could print out a copy of the book cover on card stock and put some Christmas and pirate props with it for the photo, but I don’t think it would mesh as well with the other photos in the campaign, since they have physical books featured in them.

I keep telling myself, “Patience, Grasshopper.”

In other updates, I am a few pages into chapter 30 of Maelstrom of Fate and approaching the grand finale. I’m on the last two pages of my plot point notes. Not to worry though, there will be at least one more book in the series, if not a full secondary series; however, it will not be started on immediately after finishing Maelstrom.

I have plans to scribe some more episodes of The Adventures of Pigg & Woolfe than what I currently have drafted. (Which reminds me, I need to get in touch with my beta readers.)

I also intend to start serious research for my planned dystopic novel, There Is No Arizona. I have to get that book written before many of the premises of it become reality 60 years earlier than the story’s time frame. I have some convention friends who are scientists either specializing in some of the subject matter I plan to touch upon, or who can put me in contact with the appropriate experts.

Finally, since I feel the three younger cats are now old enough to not have to worry about them hanging themselves in the pre-lit tree, I went ahead and put the thing up today to get them used to it and to see what sort of damage they may wreak. The past two years we’ve put up a live tree. The bottom branches were too dense for the cats to climb up into them. So far, so good with the artificial tree.