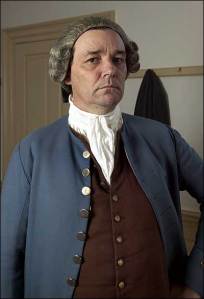 Tobias is the patriarch of the Brumble family. He runs their shipping company, Brumble and Sons, as well as some more clandestine ventures (slave trade and smuggling) under unofficially connected shipping companies. Although unproven, there is some speculation about how he came up with the capital to found his business.

He has a reputation as a vicious master, given to fits of rage and cruelty towards those in his employee. Even his sons have not escaped his lash. Only his daughter has never been the target of his abuses.

It is this temperament that made him and his company a target of the pirate, Viktor Brandewyne. A young Jim Rigger once served as his cabin boy before jumping ship in Savannah and later befriending the young Viktor. The pirate swore to visit retribution on the trader for the suffering the man had inflicted on his new friend.

Tobias makes his first appearance in Demon Bayou, the second book in the Waves of Darkness series.