Sorry about no post this past weekend. Work has been busy, and I’ve had a convention to prep for.

You may notice the “sold out” stamped on the LibertyCon banner. This is because LC limits membership to 750 people, con staff included. (That’s right, even the organizing committee members have to purchase a ticket. All proceeds from the convention above costs go to the chosen charity of the year.)

Liberty is perhaps my favorite convention so far, although ChattaCon’s revitalization has made it a contender, as well. I reserve offering an opinion on HallowCon until after I’ve attended this October.

Speaking of HallowCon, I will be debuting Maelstrom of Fate at that convention (God and my publisher willing). In honor and anticipation of that, I will be offering a pre-order sale for signed copies at LibertyCon. For now, this will only be available to LibertyCon attendees. The book will be offered at a discount plus sales tax and two options on shipping. Everyone who preorders will have to pay shipping, but those who pick up their copies at HallowCon will have that fee refunded to them then. I’m doing it this way because there is always the possibility the book might not be released on time, and I want to make sure everyone who preorders GETS their copy.

I might make this offer available online at a later date (before the book release, of course), but I’ll have to figure out how to best set it up. It may mean having to change my PayPal account from personal to commercial, or creating a separate commercial account. More on this at a later date.

Back to Con Prep: I will have 10 full sets of the 6 titles currently available in my Waves of Darkness series to sell at the con. I have my banner. I have author cards. I have a new set of convertible hand trucks (they can be turned into a 4-wheeled cart). I have preorder forms printed up. I have my garb. I have my cash drawer and my Square card reader.

I will also be holding the final Red Shirt contest drawings for the last two spots. (As you may recall, I revoked Jonathan Morris’ status as a winner after he overly annoyed me; he had won the ConNooga drawing.)

Hopefully, I’ll be taking EMPTY book boxes home at the end of the con.

As usual, I will make a “Captain’s Log” convention report and take lots of pictures to post on FB and Plurk.

I’m off from work all next week (Summer shut down in the auto industry), so I’ll finally have time to work on the cover art for Maelstrom. I may even get some writing done on The Adventures of Pigg & Woolfe. I promise I’m going to start shopping that serial to potential publishers before the summer is over. I’m only two and a half episodes shy of having two full seasons drafted.

This is the third reading from The Daedalus Enigma. I probably won’t be doing another reading video until after the publication of Maelstrom of Fate in October. I’d thought about doing readings from The Dungeon section of Readers’ Refuge, but those would be age-restricted videos due to some of the subject matter. They may still happen, but not at this time.

Here, for your viewing and listening pleasure is The Bathing of Sniff.

If you have tickets to attend LibertyCon this year, I look forward to seeing you there; if not, unfortunately the convention is already sold out. LC limits attendance to 750 people in order to maintain the small con family vibe. Tickets for LibertyCon 31 should go on sale on their website Sunday, July 2nd. I would advise booking early; memberships CAN be carried over to the next year if you are unable to attend by the time of the convention.

With all attending pros not too hung over from Saturday night’s room parties. A chance for convention attendees to mingle and chat with the pros over coffee and a continental breakfast

I finally got started on the cover art for Maelstrom of Fate this afternoon. So far, I have the background done. It has to dry fully before I start on the other images. I’m going with acrylic on canvas board again. 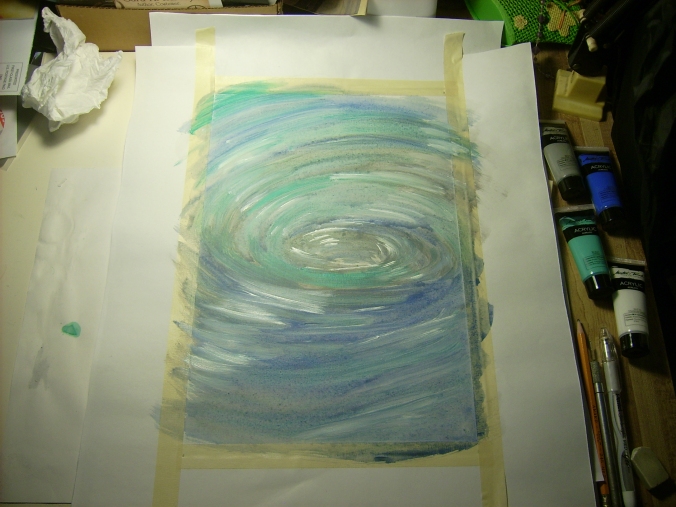 Granted, this part went quickly. I kept the brush rather wet to blend the four pigments used. I was trying to give the effect of a whirlpool. As you can see, I used masking tape and paper to ensure a clean border around the painting.

Here is the second video reading from The Daedalus Enigma.

Yet another busy weekend; not so much on the writing and book production front, but productive nonetheless. We replaced the carpet in the cats’ room with vinyl tile: easier to clean. (Cricket-of-Boundless-Energy has earned the nickname “Spootz”.)

The only progress I’ve made on the cover art for Maelstrom of Fate has been to mask off the borders on the canvas board I have for the painting.

The only other accomplishments this weekend have been to record and edit this week’s video reading and to complete a hidden object game and bonus game I started last weekend.

Without further ado, here is this week’s reading selection: the Once Upon a Tide… from The Daedalus Enigma, Sirens at War.